In the final part of this article series, we consider the teaching on what is termed as the age of responsibility and its application to our subject of discussion.

The age of accountability

It is not as if children don’t sin. Much as we would love to deny it, we see quite early in the behaviour of infants and little children, patterns that affirm a heart of sin—be it in the unkind words they speak to one another, in their self-centeredness and crave to have their way at all costs, in their bent to disobey the instruction of their parents, anger, tantrums, etc. These acts, though not well thought out by the child, are clearly sinful, going by the Biblical definition of sin.

Augustine notes in his Confessions¹, “Who is there to remind me of the sin of my infancy? (for sin there was: no one is free from sin in your sight, not even an infant whose span of earthly life is but a single day); who can remind me of it? Some little mite who is a tiny child now, in whom I might observe conduct I do not remember in myself? What then was my sin at that age? Was it perhaps that I cried so greedily for those breasts? Certainly if I behaved like that now, greedy not for breasts, of course, but for food suitable to my age, I should provoke derision and be very properly rebuked. My behaviour then was equally deserving of rebuke, but since I would not have been able to understand anyone who scolded me, neither custom nor common sense allowed any rebuke be given. After all, we eradicate these habits, and throw them off as we grow up. Yes, but I have never seen any sensible person throw away good things when clearing out, so can we suppose that even in an infant such actions were good—the actions of a child who begs tearfully for objects that will harm him if given, gets into a tantrum when free persons, older persons and his parents, will not comply with his whims, tries to hurt many people who know better by hitting out at them as hard as his strength allows, simply because they will not immediately fall in with his wishes  obey his commands, commands which will damage him if they were carried out?”

We see from certain portions of Scripture, however, that before a certain age, which we will call the age of accountability, God does not hold us accountable for sin. The Bible does not put a number to this age—only God knows—and it will be futile to speculate with regards to the exact age of accountability. However, somewhere in the mystery of God’s grace, we see that children who cannot repent for themselves will not have their sins charged to them. If that is true, then it is true of all children who fit this description regardless of ancestral heritage (whether born to Christian parents, Muslim parents, Hindu parents or not). Jesus said let the little children come to me, for the kingdom belongs to such as these; and he did not differentiate between the children of those who believed in him and those who did not.

Some relevant passages are:

Say to them, ‘As I live, declares the Lord, what you have said in my hearing I will do to you: your dead bodies shall fall in this wilderness, and of all your number, listed in the census from twenty years old and upward, who have grumbled against me, not one shall come into the land where I swore that I would make you dwell, except Caleb the son of Jephunneh and Joshua the son of Nun. But your little ones, who you said would become a prey, I will bring in, and they shall know the land that you have rejected.

(The ‘little ones’ were not punished along with the adults for the sin of grumbling against God and complaining, although we are told that the whole congregation grumbled and complained (Numbers 14:1-12)).

(The Bible here makes reference to the age at which one is able to tell evil apart from good and to refuse evil and choose the good. Before then, although one may commit sins (deviate from the appointed pathway), they are not held accountable).

Re: The people of Nineveh and those who haven’t heard the Gospel

Does the argument that infants are not held accountable for sins they commit because they do not know ‘how to reject the evil and choose the good’ justify the people of Nineveh whom God Himself said did not know “their left from their right hands”? (Jonah 4:11). And by extension, does this apply to those who have never heared the gospel?

The answer for that is found in Romans 1:19-20 where Paul argues that there is no excuse for all those who can discern God’s attributes in nature (namely His glory) and the written law of God on their hearts (Romans 2:14-15):

For what can be known about God is plain to them [that is, to mankind] because God has shown it to them. For his invisible attributes, namely, his eternal power and divine nature, have been clearly perceived, ever since the creation of the world, in the things that have been made. Therefore, they are without excuse. (Romans 1:19-20)

For when Gentiles, who do not have the law, by nature do what the law requires, they are a law to themselves, even though they do not have the law. They show that the work of the law is written on their hearts, while their conscience also bears witness, and their conflicting thoughts accuse or even excuse them. (Romans 2:14-15).

Infants are clearly not in the position to understand nor perceive God’s glory as revealed in nature, nor do they have the mental capacity to understand it—certainly not in the same way as an adult would. (Please see also John 9:41). In all this, we can trust that that the Judge of all the earth will always do that which is right (Gen. 18:25).

In summary, this article captures the belief that,

For anyone who has lost a loved one in infancy, you can be comforted in the knowledge that they are with the Lord. By extension, this exposition challenges the worldview of a heaven that will be sparsely populated. On the contrary, heaven will be very colourful. The heavenly choir will be filled with the joyous refrain of infants of all race, colour, and tongue—all who died in infancy and by the grace and mercies of our Lord were saved and granted a place in his presence where there is joy forevermore! (Whether they will remain infants forever, or grow up in heaven? Only God knows!)

One parent who lost a seven-month old son remarked instructively,

My son’s death is a great motivation for me to live right for God. God and heaven are ultimately my greatest reasons for living as a Christian, but I am also convinced that my son died as an innocent infant and is with our Father. In that case, I want to be where he is too when the time is up.

This is a great example of  how we ought to apply this teaching to our lives as Christians.

What this teaching is not seeking to encourage is a neglect of bringing up our children in the fear of the Lord.

I have heard of parents who neglect to teach their children about God under the pretext that the Kingdom of heaven belongs to them anyway, so why bother? The irony is that every parent’s wish, like mine, is to see their children grow to outlive them and not to die as an infant—even though it is far better than living. Thus, it behooves us to bring up our children in the fear of the Lord. As noted earlier, only God knows the actual age of accountability for each of our children. A seven or nine-year-old may be able to come to grips with their sinfulness and their need of a saviour—it may be at an earlier or later age, it doesn’t matter—ours is to introduce them to the rescuing love of our Saviour and pray he opens their hearts unto salvation.

The Bible is clear on the fact that there is no remission of sins except by the blood of Jesus (Hebrews 9:22). If infants who pass to glory are to be saved, we can be sure that it will be based solely on the finished work of Christ on the cross. For you  dear reader, who has yet to place your faith in the Lord Jesus for salvation, the invitation is extended to you. Why don’t you put trust in Him now? 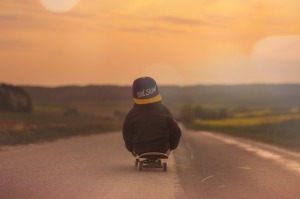 1. The Confessions, Revised (The Works of Saint Augustine: A Translation for the 21st Century, Vol. 1) (Kindle Edition). New City Press.

A great debtor to Grace, saved by the Lord Jesus Christ, and passionate about sharing the Good News of His saving work on the cross of Calvary. A husband to Mavis Yaa Adutwumwaa, and father of Caleb, Caren, Charis and Carsten. To the Glory of God alone. View all posts by Ebenezer Foster-Nyarko