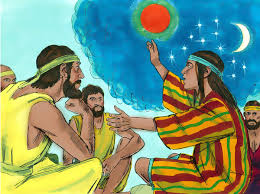 You probably might have heard or read the story of Joseph. It is one that holds great lessons for God’s people of all time. In Genesis 39:2-3, there is a quiet fascinating description of Joseph’s relationship with his master:

Reading this verse, I asked myself, “how did Joseph’s Egyptian master come to the realization that all of Joseph’s successes were the Lord’s doing?” Egyptians then were polytheistic. However, the words of the Pharaoh in Exodus 5:2-3 gives us clues that both he and his people did not know the God of the Jewish people, the Lord (Jehovah) whom Joseph served. So how did Potiphar, Pharaoh’s servant and Joseph’s master come to this knowledge?

We can speculate reasons, but two stands out to me:

1) Joseph must have told Potiphar about his faith in the Lord; the God of his fathers Abraham, Isaac and Jacob; as we see him do with his fellow prisoners in the king’s prison; and at the first audience he had with Pharaoh (Genesis 40:8; 41:16).

2) Potiphar, looking at Joseph’s life must have come to the conclusion that Joseph’s faith which he professed was indeed what gave him the successes he chocked whilst in his employ.

Joseph’s life undoubtedly, was commensurate with his beliefs. Potiphar might have observed Joseph’s lifestyle of devotion and dedication to duty. His life was a testimony. A true child of God’s life cannot be hidden, regardless of geography or circumstances they find themselves in. Though his uncompromising faith in God resulted in his imprisonment, yet still, Joseph was resolute in his convictions.

Throughout the Old Testament, the lives of people who knew their God prove that faith in God cannot be hidden under a bushel. We can mention Daniel and his three friends; Naaman’s slave girl; Esther, among many. These men and women simply would not compromise their Godly standards. What is striking about Joseph and all the other heroes of the Old Testament is the fact that through them, even pagan people (unbelievers) came to know about their God.

The stories of the Old Testament saints are not unique. Saintly men and women of the first Century Church similarly testified to their faith even at the threat of death! The apostles were persecuted for their faith; many of them martyred at the hands of wicked emperors and despotic rulers; yet they stood resolute and would not compromise their stance for Christ. At one time, the Sanhedrin of the Jews noted the courage and boldness of the apostles; and took notice that surely they had been with Christ (Acts 4:13).

Sadly, there appears to be a sharp contrast between Christians of old and Christians of our day. While earlier generations of Christians embraced trials, persecution and the sword with joy, Christians of today are taught it is unchristian to suffer (for our faith) in any shape or form. Many today are not prepared to stand for their faith, for fear of losing face or reputation, or one earthly benefit or the other. What a travesty!

I shudder to read that the words of Jesus in Hebrews 2:11. Even our Lord was not ashamed to call us (all believers in Him) brethren. He was prepared to lay down all his entitlements as God, and take on the form of a man, and the lowliest status – that of a servant! He stooped so low as to be one of us, in order that He might be the first born among many brethren (Philippians 2:6-8).

For whoever is ashamed of me and of my words, of him will the Son of Man be ashamed when he comes in his glory and the glory of the Father and of the holy angels.

Jesus decried the hypocrisy of the Pharisees in his days, who only made an outward show of piety, whilst living lives which contradicted what they taught others (Matthew 23:27). Will you stand by your Christian convictions in the face of adversities and trials? If it will mean persecution, and even death, will you declare Christ as Lord? It is time for us believers to live out the faith we profess. If our lives at the office, in the market place, at school and at play do not measure up to our profession as Christians, then something is seriously amiss.

May the Grace of Our Lord Jesus Christ help us all to practice what we preach. Amen.

A great debtor to Grace, saved by the Lord Jesus Christ, and passionate about sharing the Good News of His saving work on the cross of Calvary. A husband to Mavis Yaa Adutwumwaa, and father of Caleb, Caren, Charis and Carsten. To the Glory of God alone. View all posts by Ebenezer Foster-Nyarko

2 thoughts on “Joseph: An Example For Faithful Christian Living”